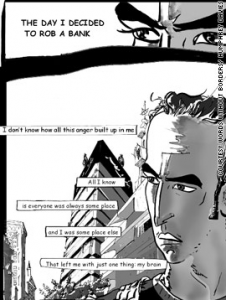 [2]An Egyptian cartoonist who was arrested and had his graphic novel banned under Hosni Mubarak’s regime is to be published in English. Magdy El Shafee wrote the graphic novel “Metro” in 2008. It was banned in his home country and El Shafee was convicted of offending public decency after a lengthy trial.

A translation of “Metro” will be published across the English-speaking world next year. It has also been published in Italian, and some Arabic copies are available in Lebanon and the United Arab Emirates. After the revolution that ousted Mubarak, El Shafee is hoping his novel will once again be available in Egypt.

“I’m sorry that my novel is available in other countries but not available to my own people,” he said. El Shafee has appealed to the new Ministry of Culture, but says that because his book was banned by court order, the courts will have to be consulted. He said: “I’m waiting to hear if the Minister of Culture will allow it to be published again. They will have to consult with the courts. I’m hoping there may be some kind of apology.”
It showed how police act and how non-violent protest was not accepted by the regime.

The graphic novel tells the story of a young computer engineer who becomes the victim of corrupt businessmen, officials and foreign companies. He becomes so frustrated that he decides to rob a bank, only to discover that the bank is also corrupt. El Shafee said: “It’s about a young man who wants to find a chance in society full of social injustice. He finds himself in a bad situation and wants to change things. It includes harassment from Mubarak’s regime and several political figures from Mubarak’s regime. “It showed how police act and how non-violent protest was not accepted by the regime.”

All copies of “Metro” were seized soon after publication in 2008, and El Shafee was interrogated overnight in a police station. He said: “It’s a bad thing that a writer or any creator should be in jail even for one hour for something his imagination has come up with.” After a lengthy trial, El Shafee says he and his publisher were convicted of disturbing public morals and fined around $1,000. However, El Shafee said he believes the real reason for the trial was that the book ridiculed political figures. El Shafee, 48, works as a pharmacist because he cannot yet make a living from his writing.

Will Lippincott, El Shafee’s literary agent in the United States, said the timing of the revolution had made the book particularly topical. “I was working with Magdy before the revolution but I waited until Mubarak resigned to sell it. It was entirely serendipitous,” he said. Extracts from “Metro” were first published in English by Words Without Borders, an online magazine for international literature, in 2008. Susan Harris, editorial director of Words Without Borders, said: “It is what the book says about contemporary Egypt that was so illuminating for our readers. “I’m absolutely thrilled that it will be published in English and very optimistic it will be available again in Egypt. It’s so in tune with current events.”

Lippincott said: “Graphic novels are new to the Arab world and that’s part of the novelty, but here in the U.S. they are selling more and more.” El Shafee said: “It’s an artistic media that’s accessible to young adults and adults as well. The reader can create their own world between the panels. “It’s a relatively new art and there are some really growing talents in Egypt and Lebanon.” The English translation of “Metro” will be published by Metropolitan, a division of Macmillan.