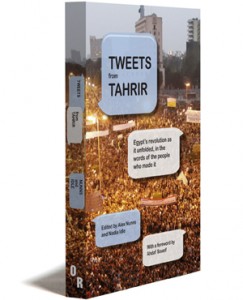 [1]Written for and published by Publishing perspectives [2], @pubperspectives.
By Yasmina Jraissati

Earlier this month, OR publishing announced the publication of Tweets from Tahrir, a book that collected the tweets from most of the active tweeters in Egypt, who greatly contributed to the revolution and to the spread of information. Colin Robinson, co-founder of OR, was quoted [4] as saying: “The book would help preserve tweets that may have been lost or forgotten”. And he is right.
The book covers a unique period in modern Arab history, including the crucial role played by social media. In this sense, the book is a valuable testimony. However, it raises an interesting question: knowing that none of the tweeters – the actual creators of the book’s content – are to receive any royalties, who is the “author” of this book?
On Twitter’s terms of services [5], it says:

“You retain your rights to any Content you submit, post or display on or through the Services. By submitting, posting or displaying Content on or through the Services, you grant us a worldwide, non-exclusive, royalty-free license (with the right to sublicense) to use, copy, reproduce, process, adapt, modify, publish, transmit, display and distribute such Content in any and all media or distribution methods (now known or later developed).”

Twitter’s short version of this clause is:
“This license is you authorizing us to make your Tweets available to the rest of the world and to let others do the same. But what’s yours is yours – you own your content.”

So you own your content and authorize Twitter to make it available, but you also theoretically authorize Twitter, on a worldwide basis to “copy, reproduce, process, adapt, modify, publish, transmit in any and all media or distribution methods.” Presumably, this includes books, then.

The relationship between you, as content producer, and Twitter, is in many ways similar to that of an author with a publisher. Except that Twitter is not exclusively licensed to use this content, that Twitter does not sell the content you’re producing, because its economic interest in this content lies elsewhere, and that you, as an author, do not receive royalties.
To make a long story short, Twitter could have sold the tweets of Tahrir to OR, and, legally at least, that would have been fine. Except that Twitter did not sell the tweets.

While in the process of producing the book, OR books did not seek Twitter’s approval. Instead, they went directly to the tweeters themselves and asked their permission. Given that one tweet is too short and usually does not reach the level of creativity required for copyrightability, at least in the US, asking for tweeters’ permission is then arguably the most that OR could do (for more on copyrights and Twitter, see Jonathan Bailey’s post [6].

Because tweets are not copyrightable because they are too short, the approach to the question of a tweet’s copyrightability only applies in a quantitative fashion and appears to be relatively straightforward.

Yet, there remains something troubling in OR’s arrangement with Tahrir’s tweeters.

Take the example of Mujeeb Rahman, aka @MujeebJaihoon, whose travelogue was published and presented at last year’s Sharjah International Book Fair. Jaihoon’s book is a travel diary based on the tweets he had posted while travelling through India. Now, imagine that someone else had gathered Jaihoon’s tweets with his permission, made a book out of them, and sold it, without Jaihoon receiving any royalties. Yes, the situation is unusual and unlikely, as Jaihoon would probably have not consented at not receiving any royalties.

In the case of Tweets from Tahrir, the only difference is that there is not just one, but many authors. Because they are many, they cannot have the same kind of control on their common book as Jaihoon does on his. And the way OR seems to have asked for the Egyptian tweeters’ permission, “Would you be happy to be part of this book?” as one of the tweeters confirmed, hints at it. The question implies that no individual is irreplaceable, and that the book, which covers a historical event, exists independently of an individual tweeter’s permission. The line of reasoning is that no single tweeter is necessary and sufficient for the book to exist. It omits that they jointly are.

Again, approaching the question from a quantitative angle misses an important point: bringing individual voices into existence on the web is all that Twitter is about. As the web is more and more about user generated content, every little counts – and can count tremendously. Even if by traditional standards the length of the tweet makes it not copyrightable most of the time, one single tweet does have some value, at least to the extent that tweets compiled together can lead to a book worth $12 on the market. In the same way, every individual tweeter’s 140 characters should be perceived as an original contribution.

Tweets from Tahrir is a good example of the limits that the traditional legal framework, in which books have been produced for centuries, seem to have reached. The web made it possible to create a book with interesting and valuable content, but with no author — in the traditional sense — to exist. This should not lead to our ignoring the author’s rights, but to a revision of our understanding of authorship.

As Twitter has empowered individuals on the web, there is a need for other forms of licenses and copyright laws to be developed to frame their productions. Perhaps the kind of licenses developed by the Creative Commons association are a good place to start:
“Creative Commons [7] licenses are roughly based on a commonsensical idea of fairness and rights’ owners being protected, while at the same time not preventing sharing, modification, re-use, and profitability” says Pierre El Khoury, copyright lawyer and professor of law, member of the Creative Commons community of Lebanon. The core idea is that the author is always credited for his content and is the one to ultimately decide how his content can be used. For example, I, as an author can decide if people are allowed to re-use or modify my content. I can decide if my content can be shared commercially or non commercially. I can also impose on the person who uses my content to share her content under the same license. So for instance, if my content is published under a “non commercial” and “share alike” license, the person who uses the content I produce cannot sell it, and must also use a ‘non commercial’ and ‘share alike’ license.

Clearly, if such a “non commercial-share alike” license was used in the case of Twitter, a book like Tweets from Tahrir would not have seen the light of day, unless it was not sold, but shared, and the profit made indirectly, in other ways. But with revolutions taking place on Tahrir square as well as in the publishing industry, surely there is room for new ways of fairly producing and profiting from written content. A persistent, if fuzzy idea of fairness suggests that either all contributors to an original work make a direct profit, or no one does.