[1]The Abu Dhabi Book Fair, organized by Kitab, a joint venture between ADACH and the Frankfurt Book Fair, has gathered exhibitors from across the Arab world this year. The presence of US, UK, German, Indian and French publishers should also be noted.

The fair coincided with both the Sheikh Zayed Award and the Arab Man Booker, or IPAF, won this year by Egyptian author Zaydan, for his novel ‘Belzebuth | Aazazil’. 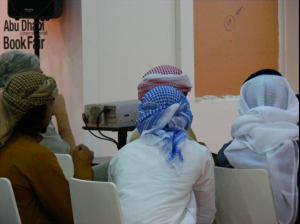 [2]‘The spotlights on rights’ program, announced at the Frankfurt fair in 2008, aimed at encouraging the trade of rights between Arab and world publishers, but also at sensitizing Arab publishers to the issue of rights. As Ramy Habeeb, from Kotobarabia, Egyptian (and only Arab) e-publisher emphasized: ‘when the average salary of an Egyptian editor is around $800, the sale of subsidiary rights, of translation for example on the foreign market, reaching a minimum $1500, constitute a very interesting revenue for the house.’

A lot, however, still needs to be done before such revenue can seriously be considered. Even if the Arab and Middle Eastern market is bound to open up to the rest of the world, as everybody at the fair seemed to expect (including internationally renowned literary agents on the lookout for best selling authors), it is not clear to all foreign publishers how Arabic literature in translation will be received. Apart from the by now familiar names from the Arab literary scene on the international one (Elias Khoury, Hassan Daoud, Rachid al Daif, Hanan al Sheikh, Houda Barakat) only a few back then unknown authors made it to the light (notable successes in the past couple of years include Salwa al Naimi’s ‘Burhan al aasal’, selling up to 80.000 copies in Italy alone, or before that Aal’a al Aswani ‘Binayat yacoubian’). Arabic literature is not easy to acquire for foreign publishers. The inaccessible language and often absence of readers the house can rely on for reports, added to the translations costs and the very uncertain commercial success still constitute a major obstacle for the diffusion of Arabic literature in the world.

Perhaps, as the organization behind the Abu Dhabi fair seems to think, international publishers will be willing to make this effort when properly introduced to the market, and better acquainted with its size and potential. This is also the bet we made over 4 years ago, when RAYA was first created.

Perhaps, as the organization behind the Abu Dhabi fair aims for, the Arab book industry will develop and meet international standards, providing foreign stakeholders with accessible and reliable information on their productions, and guaranteeing a quality work. However, this in turn, also implies that the Arab book market itself develops. Knowing that the market is constituted of more or less 320 millions of speakers (many of which are illiterates), nowadays, a book that does well in the Arab world is a book of which 3.000 copies are sold – you do the math.